Dating back to the late 1800s, residents of the Town of Bourne were protected by Constables that functioned as "Keepers of the Lock-up".  The "lock-up" was located behind what is now the current police station at 175 Main St.

On March 7, 1921, the Bourne Police Department was established, with Harry Cunningham being named the first Chief of Police.  He was followed by Joseph Gordon and Eugene Stowell.

In 1927, Thomas Leonard was appointed Chief of police.  The following year, J. Thomas Wallace was named the town's first patrolman.  His duties included patrolling the town on his Indian Motorcycle and assisting with operations at the two prisoner cells located in the basement of the Town Hall.

William Murdock was appointed Chief of Police in 1930 and oversaw the purchase of the town's first patrol car and the moving of the police station to the new fire station on Main Street (the current Fire Department headquarters).  A portable prisoner cell was installed in the fire department.  The police department would continue to operate out of the fire station until 1937.

In 1934, William Crump was appointed to Chief of Police, remaining in that position until 1942.  The police department moved to a newly constructed wing of the Town Hall in 1937.  This wing now houses the Town Administrator's office.  The department remained in that location until 1959.

James O'Toole was appointed as Chief of Police in 1942 and oversaw the building of the current police station.  The new Bourne Police Department building was completed in 1959 and dedicated on June 13, 1959.

In 1989, John Ford was appointed Chief of Police and would hold that position until his retirement in 2007.  Chief Ford would be followed by Chief Earl Baldwin, who held the position from 2007-2010.  Both Chief Ford and Chief Baldwin would go on to be elected as Town Selectmen after their retirement.

In 2010, Dennis Woodside was appointed Chief of Police and remained in that position until January 11, 2021.  Chief Woodside oversaw a redesign of the department patch and the department's police cruisers, a migration from Ford Crown Victoria sedans to Ford Police Interceptor SUVs for patrol vehicles, the addition of many new officers to replace vacancies, and the design and construction of a new police station which was completed in July of 2020.

History of the Bourne Police Department 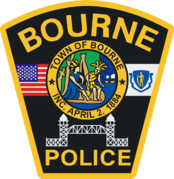